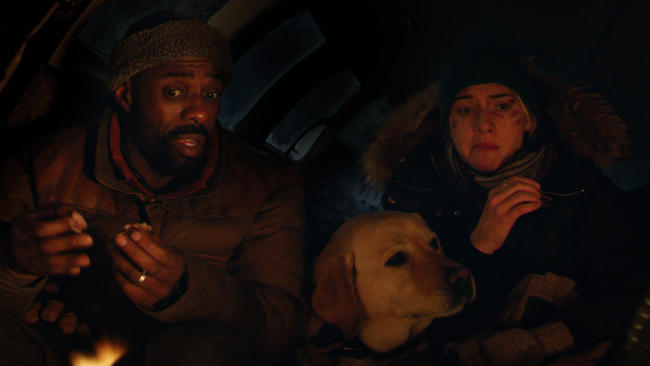 The closest I’ve been to a plane crash was on a flight back to Chicago from LA. We were coming in over Lake Michigan and the turbulence was no joke. While I was thinking about how much the airline would charge me for the fingernail damage I was inflicting on my armrests, I was carefully surveying the flight attendants.

I always assume that if they’re not panicking, I shouldn’t either.

I leaned over to my boyfriend at the time and whispered, “I’m just waiting for the oxygen masks to drop.”

His response, without looking up from his book, was, “The masks won’t drop, we’re too low. We’ll just crash into the water.”

I’m too aware of my own mortality to board a 4-person plane, but Kate Winslet didn’t get that memo.

The Mountain Between Us is the story of two strangers faced with travel dilemmas. Ben (Idris Elba) is a surgeon trying to make it to an important procedure for a young patient. Alex (Kate Winslet) is desperate to make it to her own wedding.

Regrettably, the weather never considers our plans. A looming storm has grounded their flights, but when Alex overhears Ben talking to the staff at the airport, she gets an idea. Fantastically enough, she just happens to know a guy with a plane who is crazy enough to take them where they need to go. Forget that silly old storm.

With his canine co-pilot at his side, Walter the Pilot (Beau Bridges) manages to keep them in the air for what seems like a very short time before going down in the mountains somewhere.

Ladies and gentlemen, I’ve never been in a plane crash, but I gotta say — this is a pretty tame crash.

Left with bumps and bruises, Ben, Alex, and — best of all — the dog, survive the plane essentially bumping into the mountain. After assessing the situation, tending to Alex’s wounds, building a fire, burying the pilot, and taking inventory of their rations, Ben concludes that they should stay with the wreckage until rescue crews come.

Alex makes a good point in arguing that their bonehead pilot didn’t make a flight plan, she didn’t tell her fiance, and Ben didn’t call anyone before the flight either. Together, they’ve got to trek down the mountain to the treeline.

With waning assuredness of survival, the pair will have to avoid petty arguments prompted by their less than ideal circumstances and work together to survive the elements.

This movie is equal parts survival/love story. Winslet’s character often talks about her fiance, but her words seem to fall on deaf ears. She gently prods about Ben’s wife, but doesn’t get much out of him. Naturally, she resorts to the equivalent of going through his phone when he steps out of the room and is awkwardly caught.

Her explanation: she wants to get to know the man she might die with.

Sometimes, when I cross the big bridges in downtown Chicago at the same time as a bus, the ground under my feet gives just a bit with the weight of the 12-ton juggernaut beside me and I look around to see the faces of the other people I’m about to die with.

A bridge I’ve been walking hasn’t collapsed yet, but in that moment, I don’t want to know anything about those other faces. Perhaps a snowy mountain setting elicits a more… romantic state of mind. Falling through a bridge into the stinky Chicago River probably isn’t quite the same.

Enough about me. Ben and Alex clearly have some sort of bond, but to the viewer, it feels wholly synthetic. My primary concern throughout was for the dog, naturally. Alex is portrayed as a woman in need of saving. This film does a poor job of fleshing things out. When I say that, I mean that it happily glosses over things that it just doesn’t feel like explaining.

Ben saves Alex so many times that I started a tally sheet. I came up with seven. She comes to his rescue all of one time. Unless you mean that she rescued him in a larger sense. Then it’s two.

Over all, Mountain feels a bit scattered and misinformed. Ben and Alex have a relationship that feels overly saccharine and the story just tries too hard to do too much. At the end of the day, the dog survives. And that’s all I really cared about in the first place.